Hepatitis means inflammation of the liver. The liver is a vital organ that processes nutrients, filters the blood, and fights infections. When the liver is inflamed or damaged, its function can be affected. Heavy alcohol use, toxins, some medications, and certain medical conditions can cause hepatitis. However, hepatitis is often caused by a virus. The most common types of viral hepatitis are hepatitis A, hepatitis B, and hepatitis C. 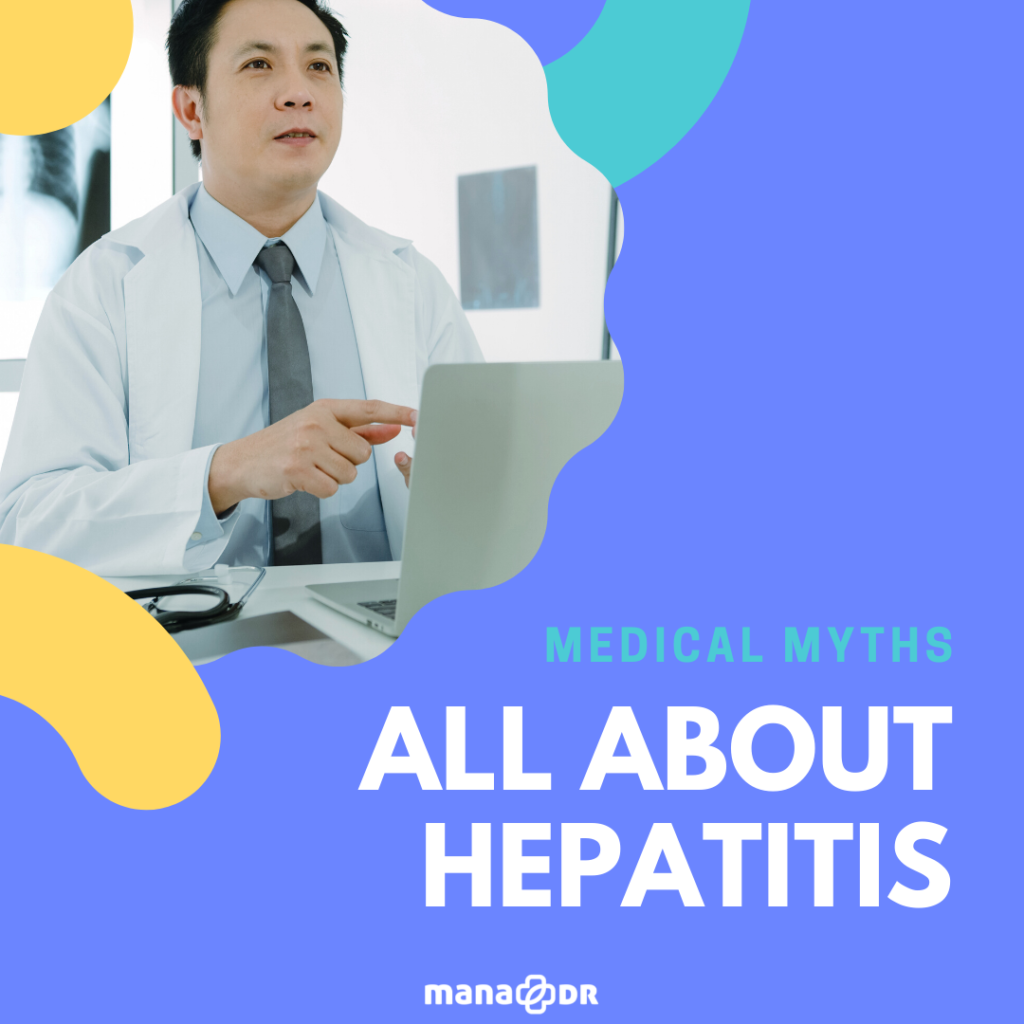 Myth: All types of hepatitis are equally serious

No. The hepatitis viruses are actually very different

Until SARS-CoV-2, hepatitis C has been the number one cause of death in the United States from an infectious disease.

The hepatitis C virus is not transmitted through breast milk. However, people with cracked or bleeding nipples should temporarily stop breastfeeding until they have healed. 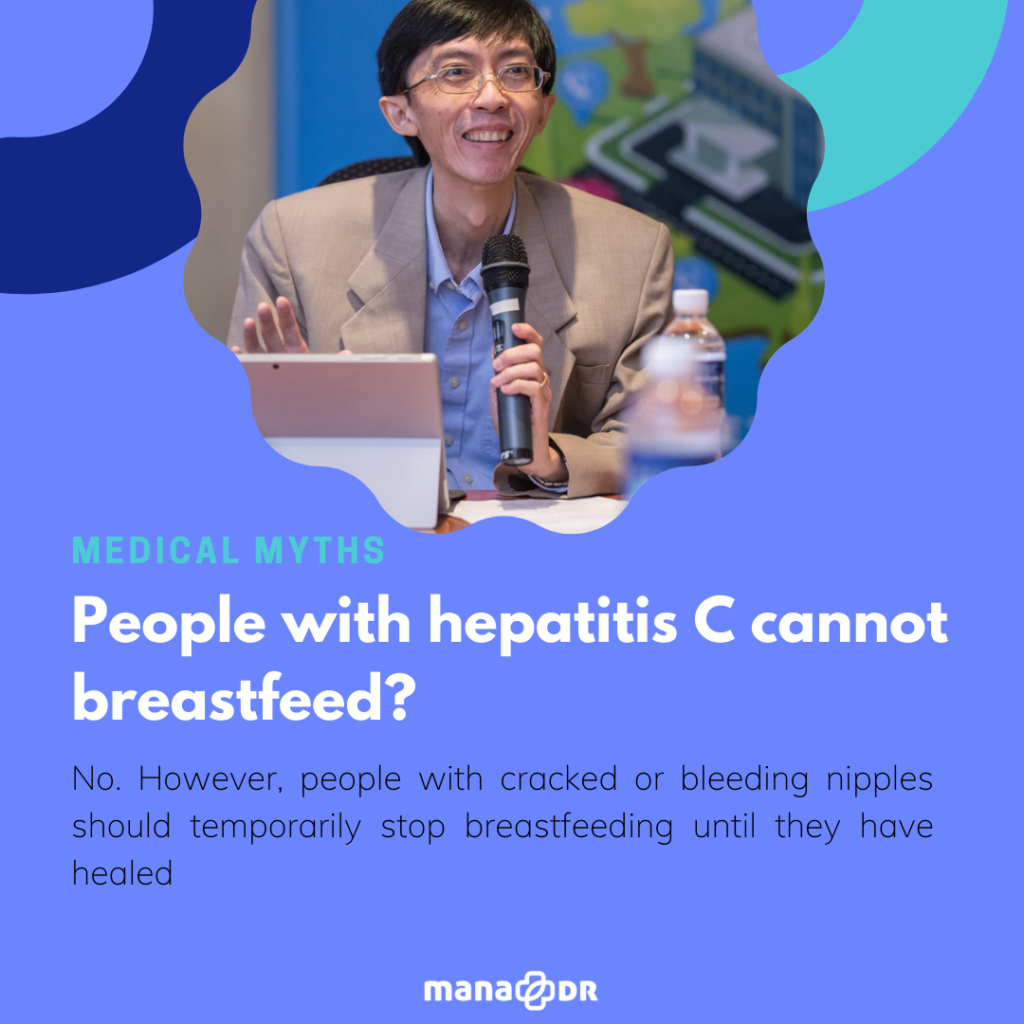 Myth: People can contract hepatitis by kissing and holding hands

Although this myth is widespread, it is still a myth. Hepatitis C virus [spreads] when someone comes into contact with blood from someone who has contracted the virus through shared drug injection equipment, non-sterile tattoo equipment, birth, or, rarely, sex.

Myth: People cannot have sex if they have hepatitis C

For monogamous couples, the CDC does not recommend routine condom use to prevent transmission. The risk of transmission is higher in those with HIV and in those with multiple short-term sexual relationships with partners who have hepatitis C virus. Under these conditions, condoms should be routinely used.

Myth: All people with hepatitis have jaundice

About half of persons with hepatitis C have no symptoms at all until the virus has caused enough damage to their liver to cause jaundice or other symptoms, which can take years or decades. 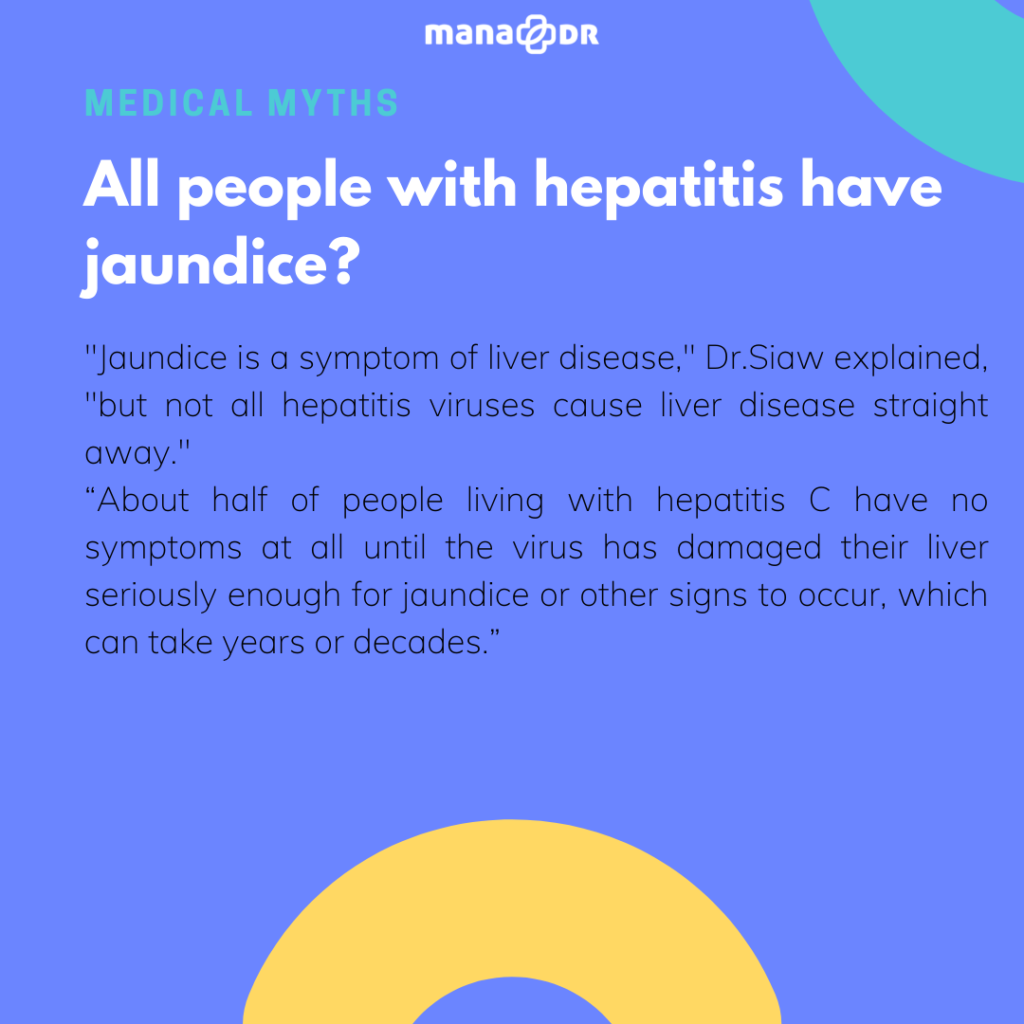 Hepatitis can be transmitted from the mother to the kid after childbirth in rare cases. However, the chances of this happening are about 2–8%.

Myth:There is a vaccine for all types of hepatitis

This is not true. Currently, there are vaccines for hepatitis A and B. Both of these require multiple shots to complete the series. As it stands, there is no vaccine for hepatitis C. 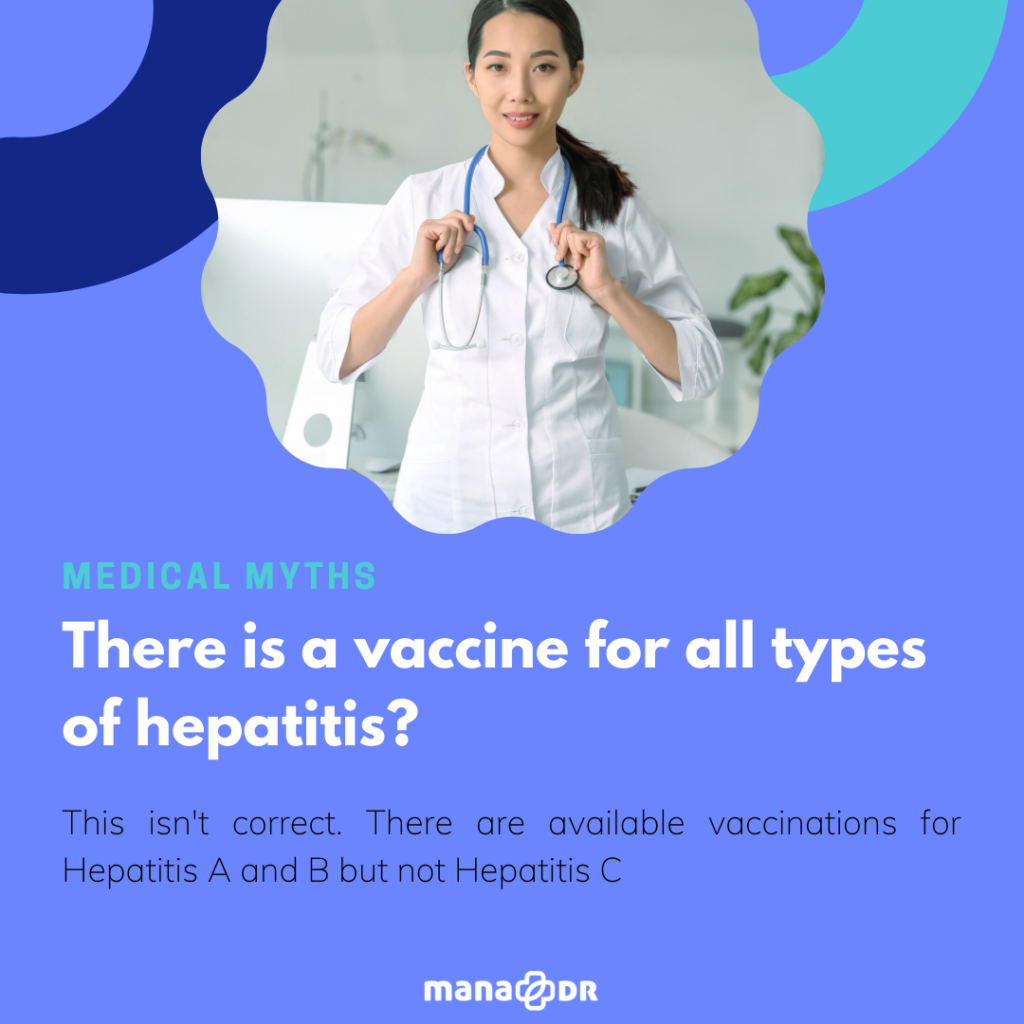 Myth: Hepatitis C cannot survive outside of the human body

In 2014, researchers at Yale University found that hepatitis C remained alive a full 6 weeks after drying on a surface and had enough infectivity to infect someone. Previously people thought it could only live 4 days outside the body. Unfortunately, it’s a very hearty virus.

This is also a myth. Once someone is treated and cured of hepatitis C, they can contract it again — antibodies from the original infection don’t protect you like a vaccine might (if we had one)

Having hepatitis C virus once does not provide immunity against getting the virus again. People can contract it again after clearing the virus naturally or after being treated with medications.

This is not true.  Current treatments for hepatitis C virus usually involve 8–12 weeks of oral therapy with pills. Cure rates are now over 90%. These new medications have very few side effects and are very well tolerated. 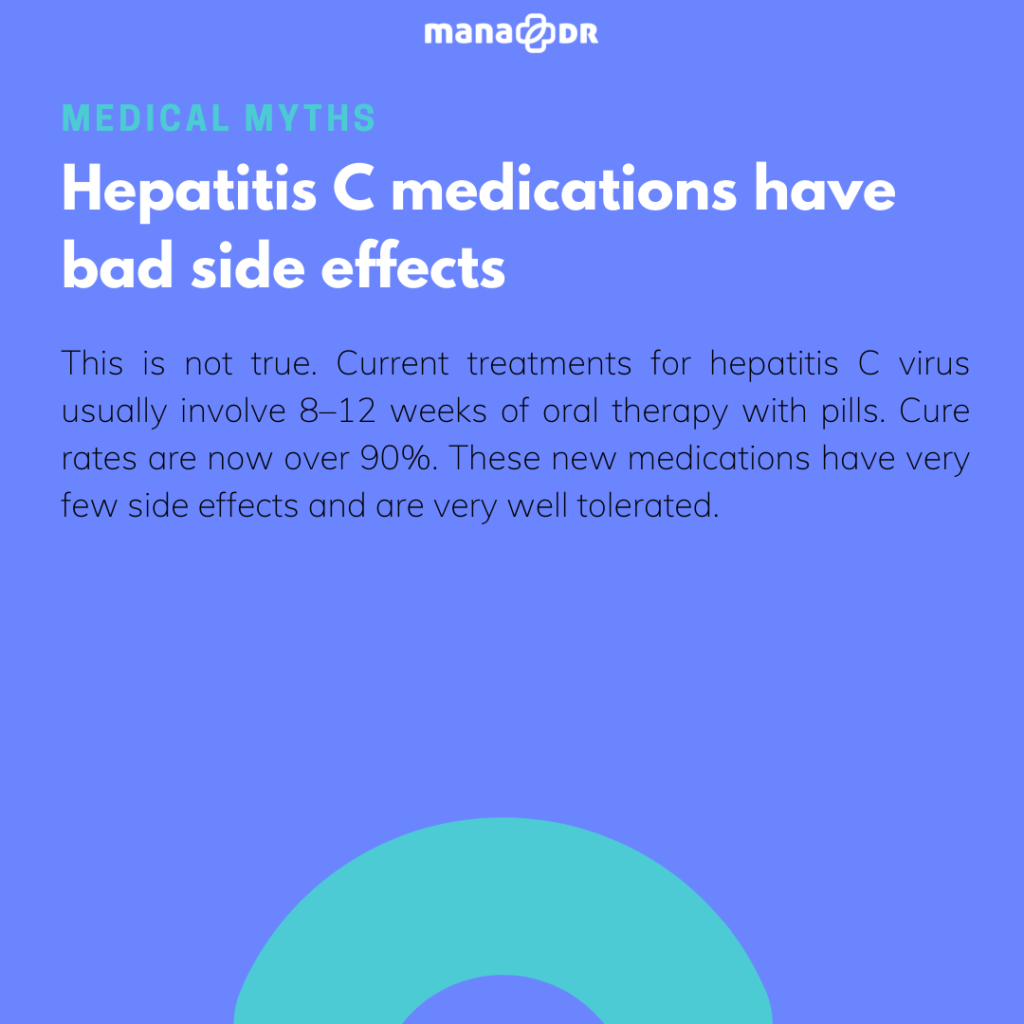 You can arrange a clinic visit online at MaNaDr application to see a doctor if you are showing any symptoms or having any concerns. 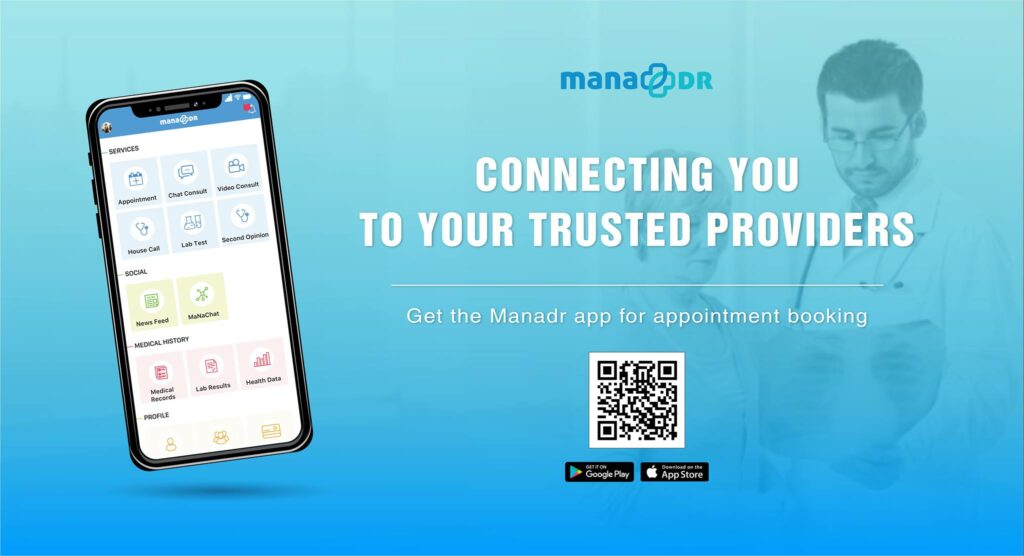